From Humble Life to Lasting Legacy 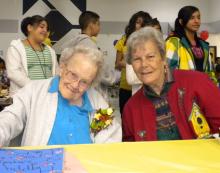 Despite growing up during the Great Depression, Bernadine Sitts was determined to go to college at any cost. The struggle she went through to attain her dream shaped the rest of her life.

Kirk Olomon, a trust administrator at Commerce Bank in Garden City, can remember meeting Sitts when he was just ten years old. As his former teacher and later client, Sitts often spoke of the gratitude she felt for those who helped her along the way.

“She was so appreciative of the opportunity to complete a college degree, because without the help of others, she would not have been able to do it.” Olomon said. “I remember her mentioning numerous times that while she attended college, people would allow her to stay in their home or would give her food. She learned how to get through it, and she never forgot that.”

For nearly 40 years, Sitts taught Latin and English, and was the yearbook advisor at Garden City High School. Known for living a very frugal life, Sitts never owned a television and walked everywhere until she inherited her mother’s 1966 Buick, the only car she ever drove. And with no children of her own, the generations of kids she taught and mentored were her family.

"Oftentimes, people think you have to have great wealth in order to establish a fund at a community foundation, but that is just not the case. It’s available to anyone who wants to make a difference."

After retiring in the early 1980s, Sitts was honored when the community named the new intermediate center for 5th and 6th graders after her. Wishing to return the gesture, Sitts reached out to Olomon.

“She called me and said, ‘Kirk, I want to do something for my kids.’ She had the idea, but she didn’t know how to implement it,” Olomon said.

“She knew what it was like to get a college degree and pay for it without the help of scholarships. The people that had helped her were long gone — there wasn’t any way for her to reciprocate. But she felt that helping others would be a way for her to honor those who had helped her, so she established a scholarship program for her students.”

Together, Olomon and Sitts got in touch with the Western Kansas Community Foundation. The foundation helped Sitts establish a scholarship fund for high school graduates who had attended the Bernadine Sitts Intermediate Center, met a certain grade point average requirement, and were planning to attend a four-year college or university.

“Bernadine couldn’t wait to award the scholarships — she was like a kid at Christmas time!” Olomon said with a laugh. “She was just so excited when that first class was graduating from high school.”

Every year, a reception for the scholarship recipients was held at the intermediate center, during which Sitts would share what she had gone through, the memories and opportunities that came with her education, and the pride she felt for these outstanding students who were continuing on to better things.

A few years later, Sitts established a second fund with the WKCF to take care of the ongoing needs of the school, from upkeep to purchasing new equipment like computers. For many, her legacy is made even more memorable by the fact that it’s a product of hard work and dedication.

“Bernadine didn’t leave a large sum. She worked hard for many years, and then made monthly deposits from her retirement pension in order to be able to do what she did,” Olomon said. “Oftentimes, people think you have to have great wealth in order to establish a fund at a community foundation, but that is just not the case. It’s available to anyone who wants to make a difference.”

Though Sitts passed away in 2011, she experienced the joy of seeing many students benefit from her gift. Olomon knows that witnessing the students’ progress during her lifetime mattered a great deal to Sitts.

“She would always write a saying on the blackboard. I’ve been out of high school for a lot of years, but one saying has stayed with me: ‘Never put off until tomorrow what you can do today.’”